Austin – Governor Greg Abbott today signed Senate Bill 7 into law at the Texas Capitol. He was joined by the bill’s author, Senator Paul Bettencourt (R-Houston). The new law strengthens educator misconduct laws in Texas. SB 7 won unanimous approval from the Texas Legislature with all 30 Senators co-authoring the bill. Governor Abbott discussed protecting students from predatory teachers during his State of the State Address in January, and Lt. Governor Dan Patrick named the issue one of his top 10 legislative priorities and was present. Representative Tony Dale (R-Round Rock) and Gary VanDeaver (R-New Boston) attended in the place of House sponsor Ken King (R-Canadian).

“A small number of teachers are tarnishing the image of some of our best and brightest teachers,” Governor Abbott said during the bill signing ceremony. “Unbelievably some of these teachers against whom these accusations have been made and been proven have faced no real consequences. “

“Today by signing this law, we’re saying no more are we going to allow that to happen,” Governor Abbott said. “These teachers with this legislation are going to face losing their job, losing their license, losing their pension as well as the prospects of going to jail.”

The governor also stated that principals and superintendents who sometimes try to “pass the trash” by sending teachers who engaged in inappropriate relationships off to another school will also face consequences under the new law. The governor thanked Senator Bettencourt for his leadership and handed him the signing pen.

“I am proud to sign SB 7 to restore the trust that should exist between teachers and students, and also between parents and teachers, and to ensure that our schools remain a place where a child can go into that school with excitement to explore, to learn and to advance,” Governor Abbott concluded.

Data shows that the Texas Education Agency received 449 reported cases of inappropriate student-educator relationships from April 2015 through April 2017, which is a 65% increase in just a two-year period. Educator misconduct reports have been filed all across Texas, including in Austin, Bastrop, Cleburne, Dallas, Fort Worth, Houston, Jefferson, Katy, San Antonio, and more than two dozen other cities.

“With Governor Abbott signing this bill today upon its unanimous approval by the Texas Legislature, it is very clear that the scourge of teachers preying on students for sexual relationships will not be tolerated,” Senator Bettencourt said. “I thank Governor Abbott for signing this bill and Lt. Governor Patrick and my fellow legislators for their full support of it. SB 7 recognizes the obvious that it’s time for inappropriate teacher-student relationships to be stamped out!” he added as the SD 7 Senator. 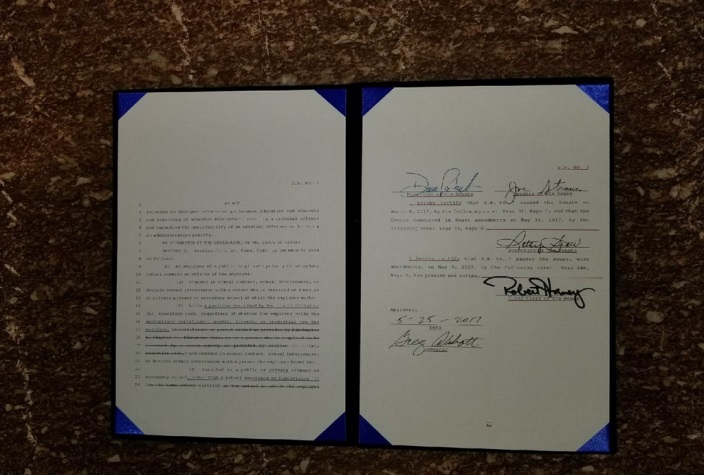