“Houston homeowners don’t want to get kicked while they are down,” said Senator Bettencourt. “No matter what tax rate the Mayor and City Council pick, if the City will not officially trigger a disaster reappraisal, homeowners who flooded and need the most help will be forced to pay this 10.1% property tax increase based upon the value of their home before the flood water came in!”

Section 23.02 of the Texas Tax Code allows for taxing units that are located in a declared disaster area  to authorize reappraisal of all property damaged in the disaster at its market value immediately after the disaster.  While some surrounding tax entities, such as Montgomery County, and Fort Bend County have triggered disaster reappraisal, the City of Houston, Harris County, and other taxing jurisdictions have not done so. 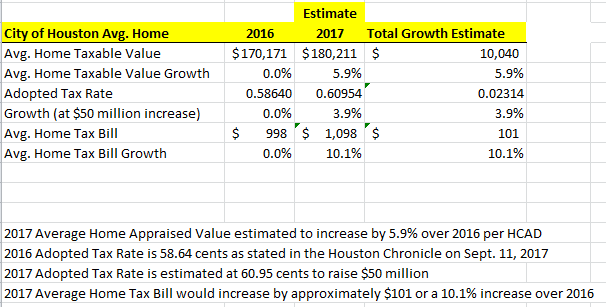 The City of Houston has emergency reserves in place that can pay short term costs while they wait on FEMA reimbursement. Council Member Martin extensively questioned the Mayor today as he quoted city financial documents saying unencumbered balances are up by $100 million.  Thus he saw no need to ask hard-pressed taxpayers to pay additional property taxes whatsoever.  Senator Bettencourt  took testimony in the legislative session that there are over $400 million in TIRZ (tax increment reinvestment zone) accounts, of which about half is unencumbered. The city could use those monies to offset these expenses as well. He continues to speak up for hard pressed taxpayers to not have to pay 10% more, or $101, in property taxes in 2017, some of which are literally trying to rebuild their homes from scratch without insurance.

“Taxpayers do not want to pay double, or triple, what the cost for clean-up actually is,” concluded Senator Bettencourt. “After enduring a 25% property tax bill increase on the average Houston home in just three years, the last thing Houstonians need to pay is a 10.1% property tax increase for just one year, after Harvey’s record flood!”