Houston – Texas State Senator Paul Bettencourt (R-Houston) will ask Lieutenant Governor Dan Patrick to give the Senate Intergovernmental Affairs Committee an interim charge concerning the City of Houston’s use of deceptive ballot language and continual erring on election procedure regarding ballot petitions and referendums. The City of Houston has now been overturned four times regarding ballot language and their handling of petitions submitted by the citizens of Houston.

“It is now more than clear that the City of Houston is forcing taxpayers to spend their personal money against the government simply to get Mayor Annise Parker and the city to follow the law,” said Senator Bettencourt. “It is not the role of local government to spend taxpayer money to actively ignore lawfully collected petition signatures and suppress petitions signed by those they are sworn to represent, much less use deceptive ballot language, per a Supreme Court Ruling.”

Three major defeats for the Mayor’s administration came in opinions from the Texas Supreme Court. They ruled that the City acted improperly by rejecting a petition, gathered by the Houston Area Pastor’s Council, to put Houston’s equal rights ordinance (H.E.R.O.) on the ballot, and they have now ruled that the City has erred on their ballot language for this ordinance in the upcoming election. The Court also recently ruled that the City used deceptive ballot language, misleading the voters into enacting a new draining fee on Houstonians. Additionally, the City was defeated in a mandamus ruling by a State District Judge and ordered to proceed to count petition signatures that were recently submitted by Trustee Dave Wilson.

“This is the fourth ball call by the umpire and the Mayor still will not take a walk and get straight with the law,” continued Bettencourt. “Taxpayers have a right to know that their money is not being spent to circumvent the law. The recent ruling by the Texas Supreme Court continues to show that Houston does indeed have a problem.”

Senator Bettencourt has sent a letter to Lieutenant Governor Patrick asking for an interim charge to get to the bottom of the apparent deceptive legal practices being used by the City of Houston. The interim charge will also examine reports of these types of practices happening in other Texas cities. 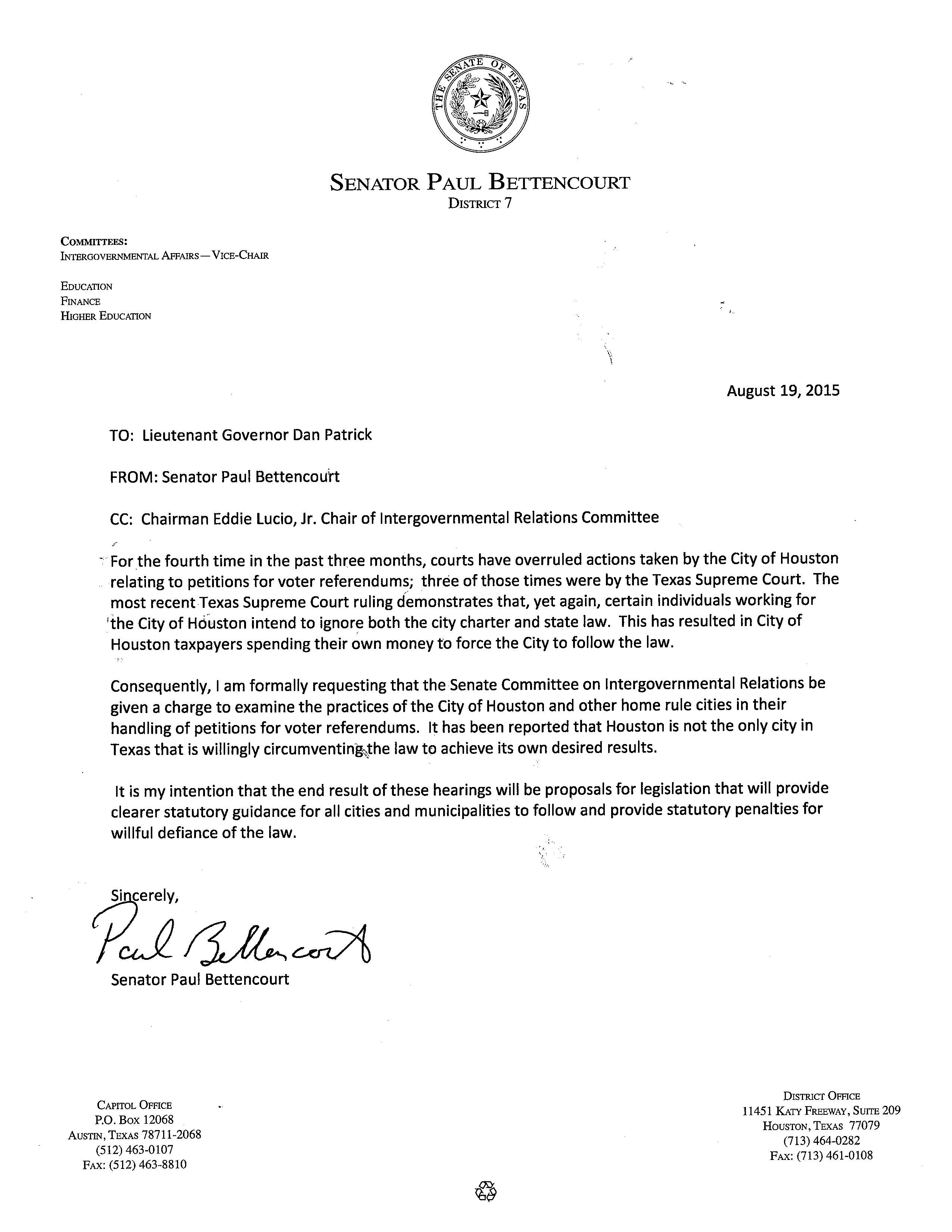 Harris DA to investigate Planned Parenthood after release of video