Austin, Texas – Senator Paul Bettencourt (R-Houston), passed two major voter integrity bills, SB 1111 to stop the use of private P.O box as a registration address and SB 1589 to create educated DPS Election Marshalls for election disputes. These bills are a step in the right direction to ensuring a trusted election outcome, and a fair voter roll. These are the last of the “Integrity-7” bills to be passed by the full Senate.

“There are approx. 4,800 voters registered at private UPS store P.O. boxes in Houston and there is quite frankly no way anyone can fit into a 2×3 inch post office box!” said Senator Bettencourt “Senate Bill 1111 is about ensuring voters are registered to vote at a physical address where they live so elections are not unfairly impacted.” he said. “We cant have impossible addresses on the voter roll.” he emphasized.

“Election issues will be resolved quickly and efficiently by the Election Marshalls and Rocket Dockets to District Judges in SB1589. That’s what the public would expect during a election!” Bettencourt added.

These 2 bills would make the following changes to voter registration to further support an accurate voter roll in each prescient as well as ensuring a rapid and purposeful response to election complaints of all parties:

“These 2 bills passing are the last of my “Integrity-7” bills moving to the House” said Senator Bettencourt. “Each one of these bills fix a voter integrity issue that will help restore trust in our Democracy and provide all Texans with the fairness and promptness the election process deserves!” concluded Bettencourt. 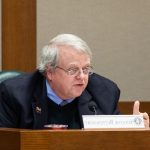